We’re on call 24/7 to react promptly to your plumbing and heating emergencies.

We all hope it wont happen to us! But unfortunately there are emergencies that arise that we have no control over. We’re here to help!

Boiler broken? Don’t worry! We have fully qualified gas boiler engineers available who can help get your heating on & your hot water running again.

One of our Gas Safe qualified engineers will check your central heating & make sure it’s working safely & efficiently.

We not only install bathroom suites, we also offer a complete fitting service including, tiling, flooring and decoration.

We offer peace of mind by dealing with your properties maintenance directly. Give us a call for more details.

Why not give us a call? We are more than happy to call in and quote on your requirements at no cost.

Celebrating 15 years in the business!

We cover a wide area of the North West including Merseyside, Cheshire, Lancashire and Greater Manchester.

Sure Fire Heating & Maintenance is a limited Company based in the North West of England. We commenced trading in 1999 and then due to rapid expansion became a limited company in 2001.

During the time that the company has been in existence it has gained a wealth of experience in the increasingly specialised field of gas central heating, and have recognised for their reliability and integrity.

What our customers say about us

Here are just some of the reviews we have received from customers through the St Helens & Wigan Trader Register program. Click here to see more of our reviews.

We own a rental property in Newton.le.w and have used the company a couple of times before. Last Sunday we were contacted by the tenants to report a fault with the heating boiler. We phoned Steve & he called the next morning to say the boiler needed replacing . He provided us with a quote & installed the new boiler on the next day. Where could you find better reliable service? Job done – the tenants don’t know how lucky they are!

Pre installation Ste gave advice, outlined what work would be undertaken and the cost. He was always contactable either by phone or e mail and rang back promptly if I couldn’t get hold of him immediately. A full installation took 3 days to complete and a team of polite and pleasant workmen turned up every day on time and worked without a break to get the job completed on schedule. The work completed was of a high standard and all my carpets were covered up and what little mess was made was cleaned up at the end of the day. Once the higher spec central heating system was up and running the higher pressure caused a leak from our bathroom sink. Water came through the kitchen ceiling and caused damage. Ste sorted the problem immediately. Downside: A bedroom radiator valve was left open when the system was turned on which caused a leak which came through the living room ceiling which was sorted straight away.

This feedback is given by Age UK on behalf of a client who asked for help finding a central heating maintainer. The client is 89 years old and wanted to find a company he could trust. Age UK pointed him to the Trading Standards consumer line and he used Sure Fire Heating. The client has asked me to pass on his grateful thanks. The service was “A1” and highly recommended. The price was competitive and the service was very good. They were clean and careful.

We all hope it wont happen to us! But unfortunately there are emergencies that arise […] 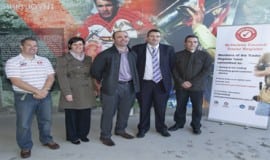 ‘Wide to West’ rugby league hero Chris Joynt, one of the most successful captains of […]